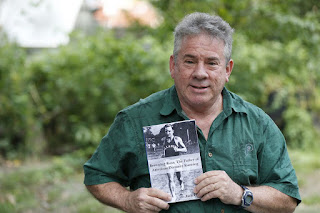 Browning Ross landed in lots of places in the long course of his running and coaching career — from England and Finland to compete in Olympic Games, to Sao Paolo, Brazil, for a torch-lit New Year's Eve race, to Ethiopia, where he had to watch his step in front of Haile Selassie's pet lion.

But one of the most unlikely was the 300 block of Ridgeway Street in the row-homed heart of Gloucester City.

Oh, and the Gloucester Catholic Rams of the early 1970s also didn't have a bus for transportation, meaning runners without their own wheels had to pile into Ross' well-traveled Buick Skylark for rides to meets and practices.

Plus, the cross-country team's course was soon paved over to make way for the Deptford Mall.

"What luck," Heath said. "How could a person like that end up coaching at a place like Gloucester Catholic?"

Heath, the cross-country coach at his alma mater of Gloucester Catholic, takes his best shot as author of Browning Ross: The Father of American Distance Running, a meticulously researched and richly sourced 336-page ode to his coach, friend, and inspiration.

The book is available through Amazon and barnesandnoble.com and should be in stores later this month, Heath said.

"I always used to tell Browning, 'You should write a book about your experiences,'" Heath said. "But he was too humble and too busy."

Heath fretted that too many of today's runners and coaches were unaware that such an important figure in the history of distance running spent his entire life in South Jersey, save for his service in the Navy in World War II and his countless days on the road in search of another race.

"I felt his legacy was fading," Heath said. "I felt like not enough people were really aware of his impact on running, especially around here. I thought, 'I want to get his story out there.'"

Heath interviewed more than 50 people during a "labor of love" that took five years to complete. He had lots of help from Ross' family, especially his daughters Bonnie and Barbara, who supplied "boxes and boxes" of scrapbooks filled with reports of their father's feats.

"For a long time, I kind of had it hanging over my head, 'When are you going to be done?'" Heath said. "But it was weird. In a way, I was able to get close to him again. I knew a lot, but it wasn't until I was able to step back and see the big picture that I realized how remarkable he really was.

"When he was alive I would find out about how years ago he won some two-mile indoor race in New York and the next day won a 10-mile in Canada, and I'd ask him how he could do that and he would deflect, 'Oh, the only thing I remember about that was that I had to hitchhike in Buffalo and it was really cold.'"

Ross grew up in Woodbury, starred at Woodbury High School and Villanova, and made the 1948 and 1952 U.S. Olympic teams as a 3,000-meter steeplechaser. He won the 1,500 meters at the 1951 Pan Am Games, finished first in the Berwick (Pa.) "Marathon" — a grueling, nine-mile race that annually drew some of the nation's top runners — an astounding 10 times and captured enough trophies and plaques over a lengthy career to fill three attics to the rafters.

Heath agrees with "Barefoot" Charlie Robbins, an 11-time AAU national champion, who called Ross the "most versatile runner of all time."

Ross' contributions to the sport stretched well beyond his own achievements in competition. In a real way, Ross laid the groundwork for the running boom that began in the 1970s and continues to this day.

He published the first nationally distributed magazine on distance running, the Long Distance Log, starting in the mid-1950s. He used to write articles and reprint race results on the back of test papers and use the mimeograph machine during his time as a teacher at Woodrow Wilson High School in Camden.

In the late 1950s, Ross was one of the founding fathers of the Road Runners Club of America. He also coached the United States cross-country team in the late 1960s.

But he probably affected the most people as a meet director and coach. Ross was a tireless promoter of the sport, staging "all-comers" events and organizing countless track and field meets, from Summer Sizzlers in July to Snowball Series gatherings in January.

He would set up a table and register competitors. He would lay out the course and set up the field events. He would time results. He would supply and present awards. He would meet and greet and treat everyone the same, from top-level athletes to below-average runners.

"He did everything at these meets, for years and years," said Heath, a 1977 Gloucester Catholic graduate who ran competitively at Glassboro State College, now Rowan University. "I don't think there's been an all-comers meet since he stopped holding them. And he did so many of them."

Ross agreed to become Gloucester Catholic's track and cross-country coach in 1972. He stayed associated with the sports at the school until his death in 1998 at the age of 74.

To Heath, it was Ross' relationship with Gloucester Catholic, a school with no facilities and little in the way of running tradition, that underscored the essence of the man — his humility, his generosity, his sense of service, his willingness to help anyone learn to appreciate the wonders of his sport.

"He was just such a nice person," Heath said. "He was this world-class athlete and he did it all the right way.

"He treated people so well. He had a great sense of humor. He helped so many people. I just think people should remember him."

Posted by Coach Heath at 9:53 PM No comments:

Dr. Fauci to Jesuit high school graduates: 'We will get through this'


By Carol Zimmermann • Catholic News Service • Posted May 18, 2020
WASHINGTON (CNS) — Dr. Anthony Fauci, director of the National Institute of Allergy and Infectious Diseases, is used to addressing the country about steps to contain the coronavirus, but in mid-May he spoke directly to graduates of the nation’s 60 Jesuit high schools with words of encouragement and congratulations.
“Please, hang in there. We need you to be smart, strong and resilient. With discipline and empathy, we will all get through this together,” he said in a recording sent to Jesuit high schools that many posted on their school websites.
Fauci, who earned the nickname “America’s doctor” years ago and has advised six U.S. presidents on national health concerns, was Jesuit-educated in both high school — at Regis High School in New York — and college — at the College of the Holy Cross in Worcester, Massachusetts.
The idea to have him talk to Jesuit high school graduates came from Jesuit Father Daniel Lahart, president of Regis High School. He told America magazine he had asked Fauci to record a video message for the school’s online graduation ceremony but that idea expanded to another video message request after another Jesuit school president said he had a similar idea.
So, the Regis president asked if Fauci could do a second, more general message for all Jesuit high school seniors.
The result is a two-and-a-half minute recording that begins with “warm greetings from Bethesda, Maryland” and ends with the doctor’s wishes of congratulations and advice to: “Stay safe and be well as you celebrate this important milestone of your life.”
“Currently, our lives have been upended by a truly historic global pandemic,” Fauci said, adding that he was “profoundly aware that graduating during this time, and virtually, without your friends, classmates and teachers close by is extremely difficult.”
The nation’s top infectious disease expert gave a shoutout to his own Jesuit education by saying he often describes Regis High School as the “best educational experience” he could have imagined. He said it was where he “became immersed in the intellectual rigor of a Jesuit education” and where he picked up key tenets of the Jesuit tradition that have sustained him throughout his life and career.
“Two of these — precision of thought and economy of expression — inform how I think, how I write and how I communicate with the public every day,” he said. He also stressed the Jesuit emphasis on social justice and service is especially important “during the present unsettling times.”
“Now is the time, if ever there was one, for us to care selflessly about one another,” he said.
Father Lahart admitted the video messages were “an audacious ask of someone who is incredibly busy and concerned with worldwide health,” but he also said Fauci “speaks so easily about what his Jesuit education means to him, so I presumed it wouldn’t take him long to film either one.”
“Today, we also can all take pride that the man who is probably the most trusted person in the United States is a graduate of a Jesuit high school and a Jesuit college. He takes great pride in his Jesuit education, and as he proudly professes, it has formed his life and his career,” the priest said.
The same week this video was posted on Jesuit school YouTube accounts, Fauci gave testimony by video before the Senate Committee on Health, Education, Labor and Pensions. He is observing a “modified quarantine” after being in contact with a White House staffer who tested positive for the coronavirus.
In his May 12 remarks to Congress, which have drawn criticism from President Donald Trump, Fauci warned some states are reopening too early and risking additional outbreaks of coronavirus cases especially in vulnerable populations.
Reopening too soon, without widespread testing and contact tracing measures, he said, could trigger outbreaks that governments may not be able to control. He also warned that new hot spots could cause unnecessary suffering and deaths and in turn set back efforts to help local economies.
On the day of his testimony, more than 80,684 people in the U.S. had died from COVID-19, the disease caused by the coronavirus, and more than 1.3 million people in the country had confirmation they’ve been exposed to it.
Fauci also repeated his call for a vaccine and warned that it likely would not be ready by the next school year.
Although his message to Jesuit school graduates was far less dire, it was not the first time Fauci has been called back to school, so to speak. A year ago, he addressed Regis alumni and waxed nostalgically about his four years there. He also spoke about his career, saying he had been decidedly apolitical and nonideological in his work with six presidential administrations.
Fauci earned the Presidential Medal of Freedom from President George W. Bush for his work in Africa developing a program to stop the spread of HIV/AIDS.
During his Regis talk last May, when asked if there was anything that kept him up at night, Fauci told the group that he sleeps well because his days are usually so long, but he did have one worry.
“I worry about a pandemic,” he told fellow Jesuit alums, saying he was concerned about the potential emergence of a virus that could attack the lungs, similar to the flu that killed millions in 1918 and 1919.